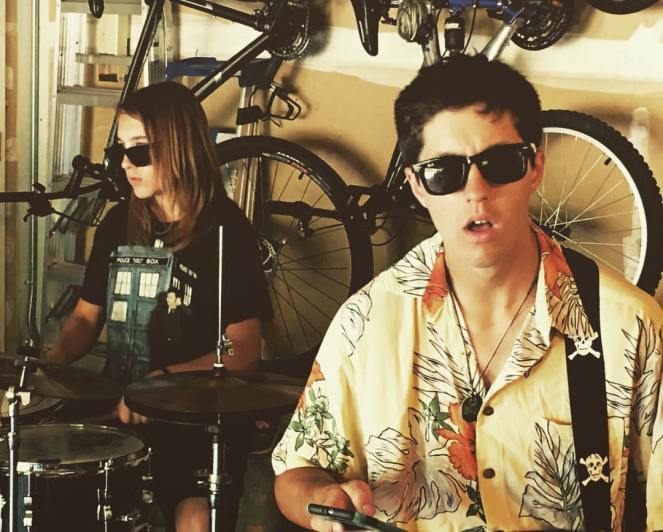 Not long ago, I was trying to explain to Shane how to count back change. After about three rounds of me explaining and him staring at me, his face lit up and he said, “Mom, I get it. You count backwards to a whole dollar. And then you give dollars back until you get to what they gave you.” I said, “That’s what I said.” He said, “No. You were using a lot of words to explain and they weren’t all necessary.”

Communicating with your kids can be hard. But I have found common ground with my sons. Music. Most weekend mornings, Shane will say to me, “Mom, check this out,” and he will play new music for me. A couple weeks ago, it was Tigers Jaw. They did a cover of Fleetwood Mac’s “Gypsy,” that we both like. Shane has introduced me to Modest Mouse, Killers, so many bands I would not otherwise have appreciated. And in turn, I’ve introduced my son to my favorite bands: Sex Pistols, X, The Replacements, The Clash.

Max and Shane went to a concert in San Francisco this past Sunday evening. As in most things involving my sons, there was a warp in their respective time space continuums so some logistical issues came up right before departure. Max had to clarify outerwear with his brother. “What should I wear? Should I wear pants?” Shane told Max he was tired and would have to take a nap before the concert. Max, who is taking driver’s ed., asked Shane, “What if you are too tired to drive home after the concert? You do know that a tired driver is a dangerous driver, don’t you?” Later, right before they left, Max asked Shane, “Do you think I’ll get high from all the second-hand pot smoke?” Shane said, “I don’t know. I don’t think so.” Max said, “Well, I can’t be high. I have to go to school in the morning.” Shane said, “Then don’t breathe.” I watched them pull out of the driveway in the mini-van. And for a moment, I was transported back to Colorado in 1982 and I was headed for a show at Red Rocks with my little brother. And it was time to slam dance and be free.

I use a lot of words to count back the changes I have been through. And Shane is right. It’s not necessary. I know I wouldn’t give any of that change back. And I know that where words fail, music prevails. The lyrics to one of my favorite Clash songs says it best: “Go easy. Step lightly. Stay free.”  For my kids. And for me.